Through our simple to understand courses and classes, learn to read, write and speak words and sentences in Sanskrit.

You will learn the fundamentals of Sanskrit in our core courses. These classes taken as a whole will give you the groundwork you need to succeed in the next classes.

Our initial sessions will centre on the Sanskrit sounds, including what they are, how to pronounce them, and how they interact with one another. We shall study fundamental Sanskrit phrases after we have learned all about the sounds of Sanskrit and the different principles governing sound change that make up the language.

We will then study action words, and these fundamental lessons taken together will offer us a comprehensive understanding of Sanskrit grammar. 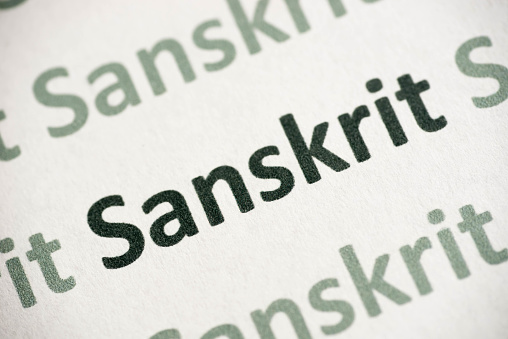 A crucial component of Indian culture is the ancient language of Sanskrit. Ancient Latin and Norse languages are analogous to Sanskrit, which is also centuries old. Sanskrit, in contrast to these languages, is still spoken today. We have often seen how useful this ancient Indian language is. When it comes to the Sanskrit language, there still remains a significant amount to learn.

The Vedas and Upanishads, which contain some of humanity's highest and most nuanced spiritual insights and portray them in exquisite metaphors, were written in Sanskrit. Its alphabet sounds are very rational, thorough, systematic, and constant. Its vowels and consonants only make the most organic noises. It doesn't utilize any "dialectized" or ambiguous sounds that alter depending on where they are in a word.

Sanskrit’s extremely complex grammar can accurately capture even the most complex and nuanced human thought, and its grammatical engine can generate an unlimited number of verb tenses. Sanskrit is the language of the Ramayana and Mahabharata that serve as the cornerstone of our Indian civilization.

Sanskrit is the language of great poets like Kalidasa, Bharavi, Bhasa, Bhavabhuti, Magha, Shudraka, Dandi, Kshemendra, Kaiyata, Bhallata, and Bhartrihari, among others, who have delved into the depths of human psychology and mined all the riches of poetic expression available. If one had the means, one could spend their entire lives reading the exquisite poetry that exists.

It is also the language used in technical and applied fields of study including those in law, business, economics, mathematics, metallurgy, chemistry, botany, zoology, agriculture, medicine, architecture, and civil engineering. The fact that ancient temples with elaborate architecture have endured violent invasions and devastation for a millennium says loudly about the achievements of ancient Indians in the physical sciences.

Sanskrit is the core of Indian civilization.

Close
We use cookies to improve your experience on our website. By browsing this website, you agree to our use of cookies.
More info Accept
Start typing to see pages you are looking for.